A Parking Garage and some Workflow Insights

Hi Everyone
I would like to give you some impressions, some details and informations about a currently finished project and my therefor used workflow and I hope that all this will interest you and sorry for too much texting

In addition to some rendered scenes (pic.1 to pic.4) I would point out some standard features of SketchUp, which are not new in deed but still worth being mentioned again and again I think simply because they are still great .

This project is a parking garage building, which is there 3 times. Each building consists of 2 « blocks », which are connected with driving ramps. Each storey level is a large « hypercomponent », which includes essentially all the detail sub-components that are repeated all over again such as steel frames, handrails, doors, pedestrian protection areas or parking marks, etc… (pic.5)
If you stack up such a « hypercomponent », you’ve almost finished half of a building here. For me it is always useful to use an external « height grid » which simplifies copying model entitys from one
storey to other storeys immensely without navigating to this actual detail point within the model
itself.

So using SU´s components is still a big thing for my workflow which simplifies working on a model! (pic.5)

The texturing of the model is essentially a standard workflow. Because in this model are used a lot of signs, such as stairs, video surveillance, elevators, toilets etc., I did a lot of textures for each single sign and all these in all the required colors! - Very quickly I lost the overview here. Since I edited the signs in one AI sheet, I decided to export only one single texture, which includes all these needed signs. This one texture I had to move then to show the right sign to the right place which worked very simply and well here
This texture positioning feature is still a big native SU thing for me as well! (pic.6)

To render any model, often is a strange thing - here you can experience some surprises, especially when the render time grows into infinity.
So my last hint at this point (pic.7) is to exclude all the light fixtures by hiding , which are not needed to render the current scene. After all, one model here contains about 500 light fixtures containing a total of about 3000 light sources. In one « worst case » scene I did a testing: when all light fixtures were enabled, the render lasted about 20(!!!) hours - aua! - but when I hid the unnecessary light fixtures, the render time reduced to about 4 hours for this particular scene which was ok for me since I used maximum quality settings and a high resolution here…
At the end of this project I could render most scenes in about 2 hours because I additionally hid - like the light fixtures - most of the geometry, which was not necessary for the corresponding render scene… Very unfortunate and a lot of waste of time that i got this idea only at the project´s end

All in all, RenderIN has shown here, that it is a very very good tool especially for interiors. 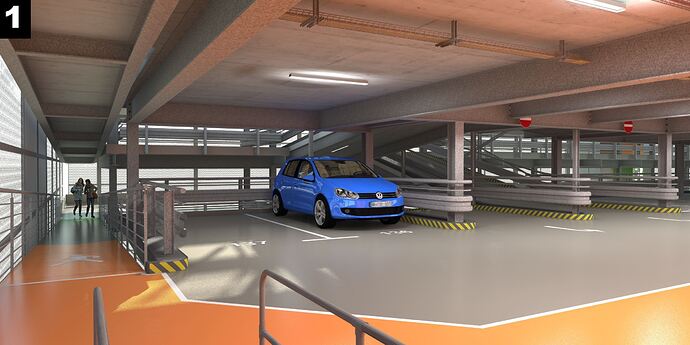 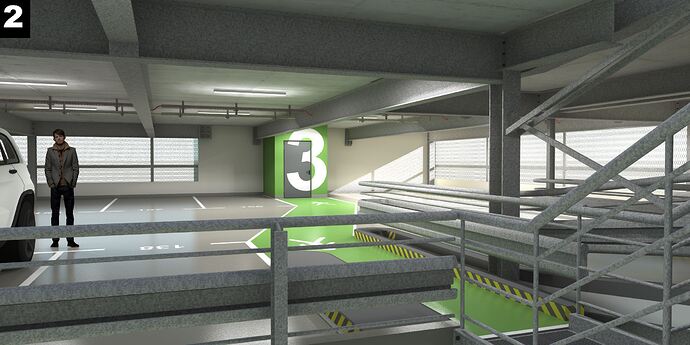 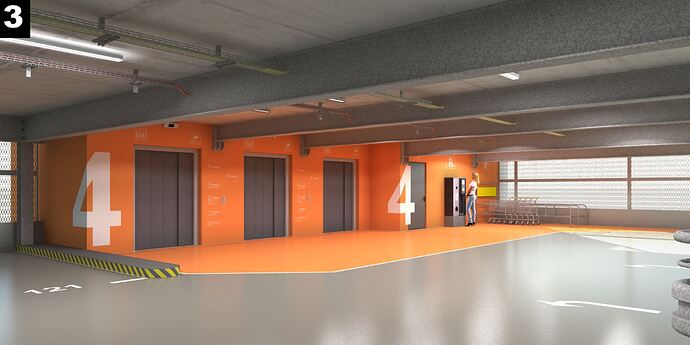 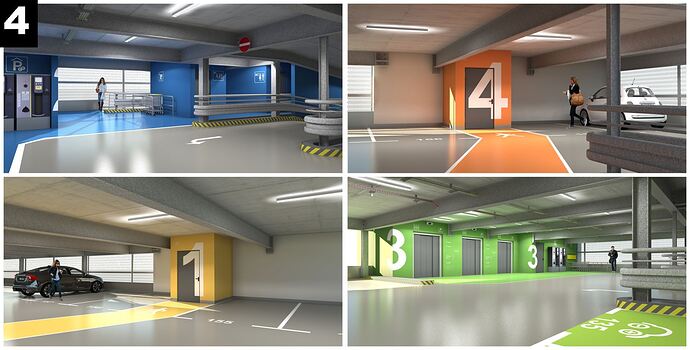 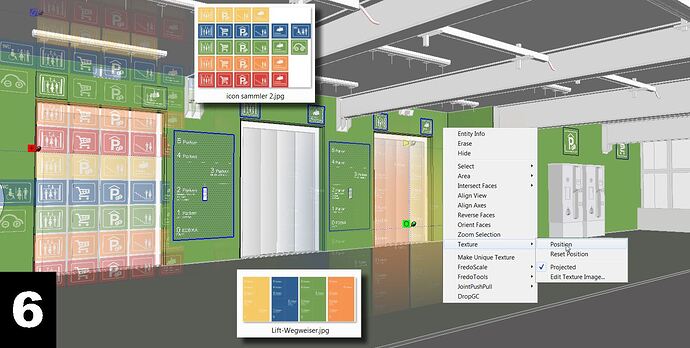 Great model and renders, just wow!
Thanks for the detailed post about your workflow, what would we do without components:)
Ik like the clear colors of the floors and walls, not making it too realistic but rather a concept realism for what could be.
As for the metal texture of the I-beams maby increase the size to reduce the repetitiveness of the texture.
I dont know if you have a bump active on the metal texture , it looks like its galvanised steel witch is usually flat and shiny.
A great source for sketchup textures is sketchuptextureclub.com.
But overall GREAT model, love the usage of the signs texture, saves a lot of space.
Also the antention to detail like the shopping carts, parkingmachine, cable gutters, signs and people makes it come to live.
All in all, awesome job.

Hi Tolec
Thank you for your comments and the recommendation regarding the texture quality - yes, this particular one - galvanized steel - is one that i use in almost every model and should be improved. Your textur named source is new to me and is is very good - thanks!